When a friend suggested we play the bleak zombie survival game Dead of Winter, I was initially sceptical. My ingrained fear of zombies certainly didn’t help but the lack of joy and fun in the bleak-sounding game put me off. And then my friend mentioned that they were using this game as a lead-in to a more complicated and more depressing game, This War of Mine. I steeled myself for a dark night, full of terrors.

Oh how wrong I was. 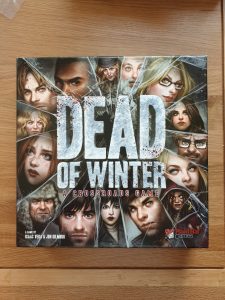 Both games are survival games that focus on maintaining a group of survivors in a home base and then ranging out to gather more supplies to improve the base and feed your group. In Dead of Winter you individually control two or more characters and need to work together with the other players to complete a group objective and a personal objective. You can have super sneaky personal goals where you need to backstab other players…but we didn’t play with those – they were way beyond my limit of not-fun. You range out to locations to pick up weapons, medicines, and food all whilst killing zombies and preventing them from overwhelming your home base. I felt that once you got past the first hurdle of getting weapons, the game got significantly easier. However, we did have the issue that someone was bitten by a zombie and it kind of spread like wildfire from there. I really enjoyed this game in the end, the zombies weren’t too terrifying, and I particularly enjoyed the cooperative nature of it. 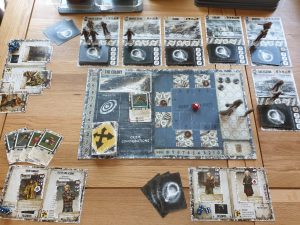 In This War of Mine, it is far darker and bleaker. Collectively, you control three survivors in a war-torn city. You stumble across an abandoned house which you move into and start to clear out. You remove issues such as rubble and bars to access heaps of resources you can use to keep your characters alive. Then at night, you range out to locations across the city to try and find resources, with a heavy focus on finding food and water. This War of Mine is far more punishing than Dead of Winter, demanding that the players manage things like how tired characters are, choosing who to feed and who to give water to. There are far more dark encounters that can force the players to kill other survivors for resources or rob from defenceless elderly people, which is sad but also fantastic because it actually makes you feel something when you’re playing. I don’t like games that flip your characters switch to sad and demand you now must act sad without actually making you feel it! And again, I really enjoyed this game! It’s so dark and depressing, there’s a manual as thick as a novel, everything is really difficult and every choice is extremely hard but I love it all the same. It really draws you in and makes you care about what happens, although there’s always survivors you make it your mission to get killed because they’re just a drain on resources. 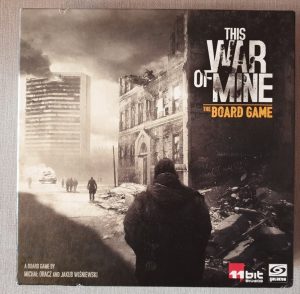 The play mechanics are so interesting, everyone playing takes turns to be in charge, passing the rule book round in a circle and whoever has the rulebook makes the final decision about any actions taken during that phase, and then you move on. It’s also an incredibly long game. We managed a game of Dead of Winter in an evening. We started playing This War of Mine about a month ago and we still haven’t finished it. Eventually, I’ll need to reclaim my dining room table, but certainly not any time soon.

Play both games. Play Dead of Winter first but play both. Both is good. 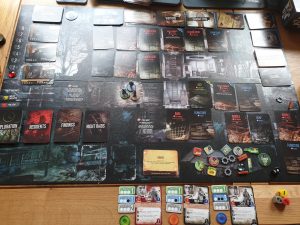 This article was brought to you by Alex Wren, Social Media Area Head in Promotions Glasgow in 2024. Alex lives in the Glasgow area and is currently doing a PhD in Biomedical Engineering. When she isn’t being our fabulous overlady of social media, she enjoys cosplay, running and playing Dungeons & Dragons, video games and loves board games. This Rookie’s Guide to Games Series is her excuse to try new games and expand her collection. Look forward to Alex’s posts every other month!