It’s the second Wednesday of the month, and that means it is time for our second Meet the Committee post. This week, you’re introduced to Brian Nisbet, who presides over IT Systems. 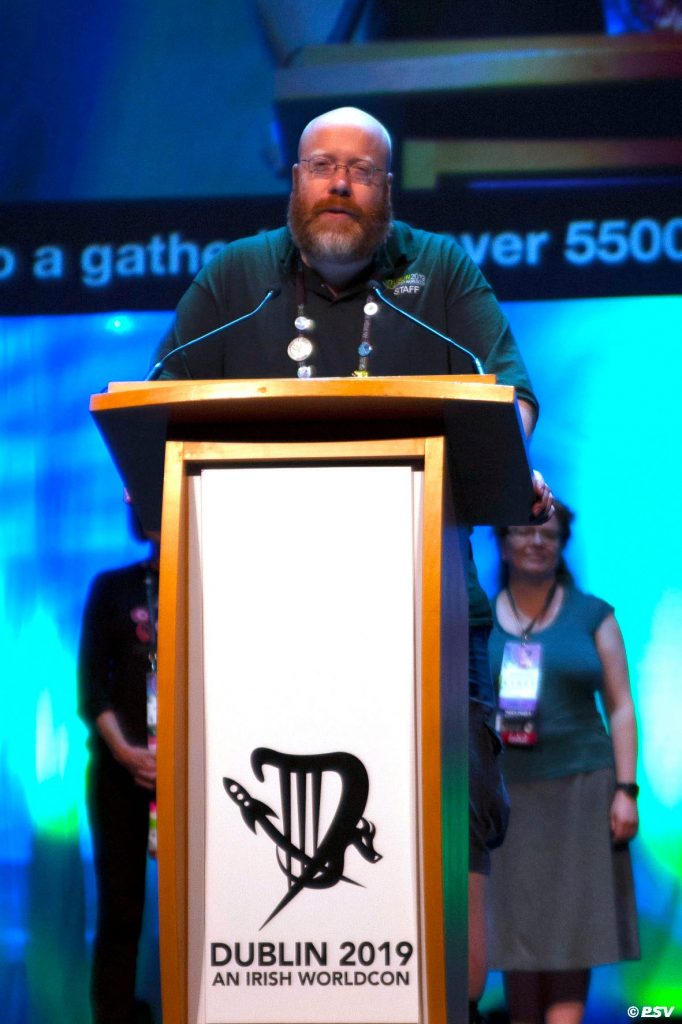 Brian is an Irish gamer, fan and conrunner who lives in Dublin with his wife Shevaun. In his own words, he’s “rather passionate” about Worldcon, and got involved with Glasgow 2024 early after the announcement of the bid.

Since then (early-ish 2017, even before Glasgow had been chosen as the bid venue) he has done a few things for the bid. Mostly this has been promotions, since the Bid Committee’s primary job is to get the word out. In addition to that he supported the bid’s IT Infrastructure, but most of his work right now is around inclusion and diversity, including the Code of Conduct. Brian has experience in this line of work before from other conventions, though the Glasgow 2024 bid has come with new challenges and new learning opportunities. Building an inclusive community around the Worldcon we hope to run is one of the Glasgow 2024 bid priorities, and Brian is excited to play a part in that.

Like Marguerite, Brian’s first Worldcon was Interaction in Glasgow in 2005. He recalls meeting a lot of people and spending quite a bit of time in Ops. In his own words, though “it was far from my first convention, but it did show me that the Worldcon community was one worth spending time with and on.”

The first con he ever attended was the 1990, Trinity College, Dublin’s gaming con, Leprecon. As the oldest con in Ireland it also hit many of Brian’s firsts: first con, first time running a game at a con, first time staffing, first time on the committee and, in 1999, first time chairing an event. Brian recalls fondly the feeling of finding his tribe among other gamers and people who shared some of his passions: “It’s difficult to express the feeling of walking into a building and realising that everyone else there shared some of the same passions. As a teenager who didn’t know any other gamers than the handful of people in our weekly game, it was transformative.”

Gaming, be it tabletop RPGs, board games or computer games, is still a huge part of Brian’s life. He has chaired, and even set up, other games conventions in Ireland, and attended them all over the world. Even over the last two years he managed to attend them online and had the honour of hosting charity auctions in Ireland, Scotland and England raising money for some very good causes!

After chairing Gaelcon (Ireland’s largest gaming convention) in 2001 Brian got more heavily involved in the International Discworld Convention, working Ops for many years, then chairing in 2010 and 2012. He was most recently involved in IDC in 2014, the weekend before LonCon 3, most of which he spent promoting the Eurocon in Dublin (the following weekend) and the Dublin in 2019 Worldcon bid. At that point it was safe to say that Worldcon had taken over a lot of his mind and soul. Brian, alongside Glasgow in 2024’s Marguerite Smith, have also just indicated their intentions to run a Dublin in 2029 Worldcon bid.

Since the world changed in March 2020 Brian has been able to work from home, running services for the Irish National Research and Education Network, HEAnet. His role also involves quite a bit of disaster recovery and business continuity planning, but he never thought that “we can’t get to the office” scenarios would be put into practice for so long. He has also been working hard on DisCon III, the 2021 Worldcon slated to take place in Washington, DC this year.

Brian’s motto is “never let a good crisis go to waste!” The pandemic has meant more time to enjoy various media. In his spare time, he’s been reading lots of books and watching many shows that he would never otherwise have had time for. He and his wife have been watching an episode of something every day with lunch, and most days with dinner. So far they’ve worked through Star Wars: Clone Wars, Rebels, The Dragon Prince, Avatar: The Last Airbender, Avatar: Legend of Korra, to name but a few. Many people have wondered how different it would be if the pandemic had happened 10 years ago and Brian’s guess is that it would have involved a rewatch of Babylon 5 on DVD. As it keeps on going, that isn’t off the table yet!

In the end, for Brian, it’s all about the journey. With a foundation of Star Wars, Irish mythology, Tolkien and D&D as a child, he’s mindful of his roots, but also excited for the road he’s gone since then and everything the future still holds. He desperately hopes that Glasgow 2024 will be another milestone on that journey, when he will get to experience new stories, new people, new games and to facilitate and support thousands of people in enjoying and expanding their minds and community on the banks of the Clyde! 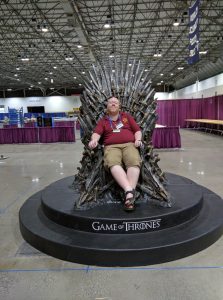