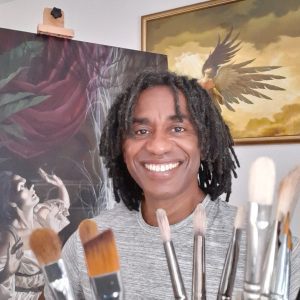 Chris Baker (he/him) is an acclaimed BSFA Award winning artist whose work has graced the covers of many beloved SF and Fantasy novels including Robert Asprin’s Myth series, and the British and German editions of Redwall. He’s also worked on numerous major motion pictures for such visionary directors as Steven Spielberg, Tim Burton, and Stanley Kubrick.

Chris Baker RBSA (a.k.a. Fangorn) has had a highly varied artistic career. Initially employed as a Graphic Designer, he then went on to produce art for gaming, SF and Fantasy, children’s books, and graphic novels. Amongst these are covers for Robert Asprin’s popular Myth series, the British and German covers of Brian Jacques’ Redwall series, and illustrations for a deluxe edition of Stephen King’s ‘Salem’s Lot. It was the art he produced for the graphic novel adaptation for David Gemmell’s Legend that caught the eye of director Stanley Kubrick, which subsequently led to him being hired to develop designs and story concepts for his film, A.I.

After Kubrick’s untimely passing in 1999, he then continued working with Steven Spielberg on what was to become A.I.: Artificial Intelligence. He has since gone on to work on many features, working very closely with the likes of Tim Burton and Sam Mendes. Notable credits include Road to Perdition, War of the Worlds (again with Spielberg), Charlie and the Chocolate Factory, Alice in Wonderland, The Golden Compass, Skyfall, Star Wars: The Force Awakens, Ready Player One, and, most recently, the sequel to The Man Who Fell to Earth for television. He has also dabbled in producing music videos.

Chris is a member of the Royal Birmingham Society of Artists and has also been recognised by the US Art Directors Guild for contributions of excellence to the film industry. His book covers have been nominated three times by the BSFA and have picked up the award on two occasions.

Outside of his media work, Chris has exhibited his art at many SF conventions and is currently working on a series of SF and Fantasy-related oil paintings. His other passions include print-making, producing figurative sculpture, and a newfound love of throwing pots.