Thanks to Sean Guynes and Keren Omry, I’m writing a short book of around 30,000 words on Joanna Russ’s The Female Man for their new series, Palgrave SFF: A New Canon. Hopefully it will be published in 2023.

I’ve been fascinated by The Female Man since I read it some time in my teens. Russ began working on it in 1970, finished it in 1971 but it wasn’t published until 1976. It was one of the very first sf books by an out lesbian, and it’s exploration of sexuality and the challenge lesbians offered the patriarchy remains exciting.

The Female Man received very much the reactions she predicted within the book itself, and has continued to confuse and confound. When I taught it I could always tell who had finished the book: the discussion was ferocious as different students talked about what they did and didn’t recognise. My loans of the book never return so I keep second hand copies to give away. The book is flawed: it’s of its time and its transphobia (assuming all transition was a coerced consequence of the patriarchy) is a problem, but Russ did regret that. But it remains one of the most exciting and challenging books in the sf canon.The oddity is that while the content of the book is discussed widely, even in the monographs by Cortiel, Mandelo and Jones there is hardly any consideration of its experimental structure beyond acknowledgment. This quote from LeFanu is not untypical:

The book will begin by situating Russ’s work in her anger, her wide reading in science fiction and other areas, in her Jewish background (not mentioned by a single critic to my knowledge, yet I think it is relevant to the joy-in-argument that distinguishes book; and she herself argued that it was what Jewish men claimed as theirs that she wanted: poetry, philosophy, science and fiction). Then, inspired by Audrey Taylor’s work on Patricia McKillip’s chronotope, I intend to focus on the narratology of the book.

The Female Man is made up of 110 distinct sections, divided into 9 parts. With the exception of part 9 which is half the length of the others, each part is roughly the same length. The text takes place in three time periods: two 1969s, and two “futures” which may be parallel worlds or may exist in sequence. In addition, sections of the text—the most performative sections—take place in yet another 1969 that is at the same time a longer period defined less by calendrical time than by ideological time, it takes place in an anti-polder, an unsafe space of a patriarchal dance of survival couched as liberation in which women’s dis-enfranchisement in work, relationships and self is reframed as being cared for.

However the division of the parts into sections varies considerably both in terms of the number of sections and thus their length, the rhetorical choices made for these sections, and thus overall the pace. Each section takes one of a number of different rhetorical modes, here divided between Story, Observational (or sometimes expository), Performative, and Exemplar. These modes are not used equally, and nor are they distributed evenly.

Story, those sections that move the story on, form the bulk of the sections (43); Performance, the short sketches in which archetypal interactions are replayed (26); Observational sections are those in which we are told something about whichever world we are in (31) and finally there are Examples, often the very shortest sections taking up as little as one line, but rarely more than ten, in which we are shown a swift scene, or given a free standing one line throwaway (10). Another critic might of course divide these differently, or even with these terms come up with a different count.

Parts 1, 4 and 8 are heaviest on Story but the overall structure is that of a cradle, in which the story is the framework for the other rhetorics: story holds the performative, the observational and the examples.

Furthermore, the Story sections are hypo-diegetic scenes, short stories about each character embedded within the larger narrative which is, unusually, extra-diegetic and is constructed through the hypo-diegetic Observational and Performance scenes. As a novel The Female Man lacks the usual diegetic circle, perhaps it is most similar to Tristram Shandy. 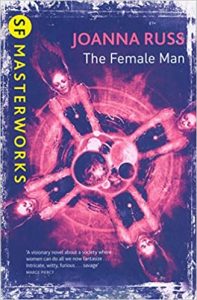 Performance scenes, which have a thematic function (Rimmon-Kennan 93) are relatively evenly distributed but there are more in Parts 4 and 5 which are also the two longest sections.

The Observational sections which have an explicative function, operate to investigate and outline the worlds we are in and function as guide.

The Examples are the photographic snapshots, primarily of Whileaway, seen as if through a window. They are simultaneously the most neutral sections and yet also the strongest argument thread in the books. They are a presentation of a possible truth. Along with the Story sections they are actional: ‘they advance the action of the first narrative by the sheer fact of being narrated.’

The categories are not distributed evenly across the Parts of the book and the functions they play differ according to the ways in which they are focalized.

That’s as far as I’ve got so far, but there is a real pleasure to dissecting the text to think about how it works and how this affects what it has to say. I’m hoping it will be productive.

This article was brought to you by Farah Mendlesohn in association with Promotions.

Farah Mendlesohn won a Hugo with Edward James in 2005 for The Cambridge Companion to Fantasy Literature. Mendlesohn is also the author of Diana Wynne Jones: The Fantastic Tradition and Children’s Literature, Rhetorics of Fantasy, with Edward James, A Short History of Fantasy, The Inter-galactic Playground: A Critical Study of Children’s and Teens’ Science Fiction, with Michael M. Levy Children’s Fantasy Literature: An Introduction, which won the World Fantasy Award and the Mythopeic Award in 2017. The Pleasant Profession of Robert A. Heinlein was published in 2019, and Creating Memory: Historical Fiction and the English Civil Wars in 2020. Mendlesohn is currently working on a monograph about the radical children’s writer Geoffrey Trease, and a short book about Joanna Russ’s The Female Man.
Farah Mendlesohn is now the only three time winner of the BSFA award for non-fiction. Farah is on twitter as @effjayem