Welcome to the first in our “Meet the Committee” series! Today, you’ll meet Marguerite, the Vice Chair for Glasgow in 2024. She is originally from California but has been based in Ireland for nearly half her life. As Vice Chair, she is there to back up Esther, our Bid Chair, but also to challenge her when needed and to generally keep an eye on the high-level, strategic view of things. 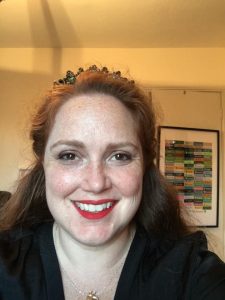 Marguerite has been attending cons and helping out with them for a very long time. Her first Worldcon was Interaction – the 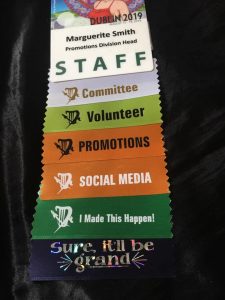 last Worldcon to be held in Glasgow in 2005. Despite being near Worldcons before that (she went to college near Anaheim in 1996), it had all seemed fun but very distant – until some friends persuaded her to tag along to Interaction and she’s not looked back since. She loves the event as a social event, a highlight of the year where she gets to meet up with friends, but for her, the pleasure of working as part of the team making it all happen behind the scenes is just as important. She started out volunteering for a shift at the Info Desk at Interaction, so she’s never known a Worldcon where she didn’t try to get involved. From that, she went up the ranks to staff and then committee. More recently, Marguerite has been a Deputy Head of Promotions for Dublin in 2019 and the Deputy Head for WSFS for CoNZealand in 2020. Marguerite is also one of the vice Chairs for DisConIII, 2021. 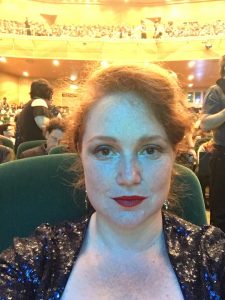 When she’s not running around making sure everyone has a fantastic con experience, she is a sort of jack-of-all-trades. In various past lives, she’s been a trainee accountant, worked in telecoms, and was a Gymboree instructor, where she travelled around and taught kids through music. In this present life, she is a technology architect for a major consultancy company. But while these all may seem very different to running a con (and they are, based on their individual components), there is a surprising amount of overlap on a larger scale of things.

And this creativity and diversity shimmers through in Marguerite’s leisure activities too – she is the type of person who gets very excited about new hobbies, only to ignore them soon after (for example, she got very into crochet, amassed loads of yarn which now lives in her bookcase, not having been touched for months). Most consistently, she has kept up reading, mostly fantasy and romance, music – she takes lessons weekly – and calligraphy. One of the things Marguerite has used to keep herself sane during the insanity of the past year is writing physical letters, using overly-decorated envelopes, to anyone foolish enough to let her have their address. For her, the act of picking up a pen, filling it with ink, and writing words to someone has been wonderful. She finds that there is something very special about seeing something physical arriving in the post, even if it comes from someone who you regularly talk to using other mediums. 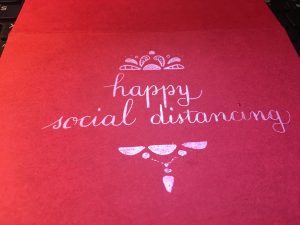 While 2020 has been a tough year for many, Marguerite has been inspired by the way that it has made most of us come together and make personal sacrifices in order to ensure that we are taking care of others. This is not only true of the reaction to COVID-19, but she sees threads of this community spirit in the different social justice movements across the world as well. Be it the ongoing Black Lives Matter protests, solidarity protests for ending SARS in Nigeria, reactionary laws in Poland or the massive efforts to make sure children are being fed when governments don’t step in. There is so much still to do, but Marguerite believes that we are seeing a real, international change in support.

Thinking ahead to Glasgow in 2024, Marguerite is very excited about all aspects of the con. The team is doing their best to bring Worldcon back to Glasgow, and to bring their best Worldcon to Glasgow in the process. She finds the team absolutely astonishing, and they are already doing a lot of work with local communities, so that she knows that they’ll be building on strengths. The prerogative is that they are building a Worldcon that is both of and for Glasgow, with a strong local focus, and that’s why she is excited that they’re already laying groundwork with different local organisations. Another crucial element of their approach is to listen to diverse voices during the planning process. This does not just include advice from those who have run previous Worldcons – though there is definitely a lot to learn from them – but also from those doing new, different and exciting conventions and gatherings.

And if you’re looking to fill some time until Glasgow in 2024, here are some of Marguerite’s gateways into SFF: Currently, she is looking forward to Season two of The Mandalorian, but some of her early favourites are the Wonder Woman TV show – Who didn’t want to be Wonder Woman growing up and go around fighting the “noxies” as Marguerite called them? – and the film Willow. She’s pretty sure that she made her family watch Willow so often that they actually wore the VHS out (yes, in ye olde days) – and you bet she’s excited that there is now a TV adaptation in the works. The most memorable books from her childhood are Susan Cooper’s The Dark is Rising series, though there were many others. And of course those particular titles were what fit her growing up as a young white girl in suburban California back then. There is so much more out there, and especially so much more wonderful diverse work that if she were to recommend something to someone, she’d really want to find out what that person already enjoys and be able to hand them something that is just right for them.