I was super excited back when Dublin 2019: An Irish Worldcon produced custom dice featuring its logo. 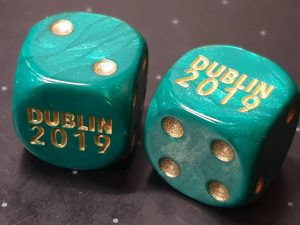 However, the Dublin dice were d6s. I thought it would have been cool to have a D20 with the Dublin logo on the 19 side. Unfortunately, while lots of places will stamp a custom side on a d6, other sizes of dice are more difficult, and generally not affordable.

So, a couple of years later, I got into 3D printing, and thought it would be fun to try making my own. I like the idea of putting the convention logo on a dice shape that seems appropriate for the convention. For Dublin 2019, the 19 face of a D20 seemed right, and for Glasgow, could I make a 24 sided dice? 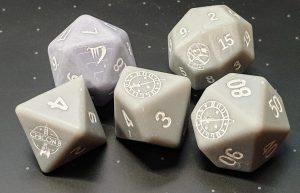 First I needed a 3D model of a die. There are many different applications that could be used to design dice, but for geometric shapes like dice, it is generally easiest to generate them programmatically, and a great free program for that is OpenSCAD. This lets you write a program to generate the 3D shape you want. I’m sure I could have done this myself, but it turns out, other people have already created all the Platonic solids and even multiple patterns for applying the numbers to the sides. I also found some non-Platonic solids, and I found a d24 shape (which is basically a D6 with each face divided into four). So that part was more or less done for me.

I did some tinkering to see if I could get OpenSCAD to apply the logo for me. However, I couldn’t get it to come out the way I wanted, so I ended up generating a die shape with one blank side. 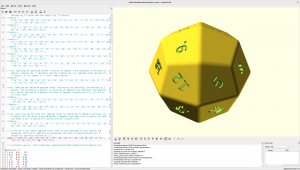 Before I could go any further, I needed the convention logo in a suitable format. Bitmap formats won’t work because they can’t be turned into a 3D wireframe, so I needed to trace the shape into a line drawing and save in a vector format (SVG is the most popular). I used Inkscape (another free program) for this. There are tools that will automatically trace the bitmap, but I’ve generally found they don’t work well enough, and I’ve needed to hand trace the logo. I’ve also generally needed to make some tweaks to the logo, as very fine details tend to get lost in the 3D printing process, so there’s some decision making about which details to widen and which ones to leave out. 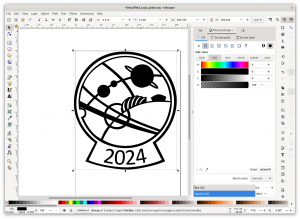 At this point, I have my 3D dice shape and my 2D line art logo, so I need to put them together. The tool I used for this is called Blender (yes, this one is free too). This is a massive application that can do many things and is widely used for 3D animation, so I only use a tiny fraction of its capabilities. I load my die shape and position it so the blank side is facing upwards. I then import the 2D logo line art, apply an “extrude” function to give it some height, and use a “difference” operation to subtract the logo from the die. Once I have done that, I can simply save the completed die shape.

The printer itself uses UV light to solidify a bath of resin, a layer at a time. Each layer takes a few seconds, but because there are many layers, the whole process can take several hours. The good thing is that I can print several dice at the same time. My printer is called the Elegoo Mars, but there are lots of similar models available. 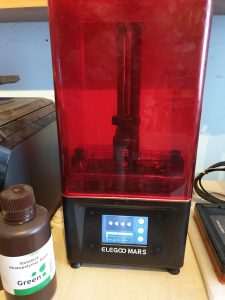 To tell the printer what to print, the 3D model needs to be prepared with a program known as a slicer. The one I use is called ChituBox, and there’s a free version (there is also a premium version with extra features, but I haven’t needed this so far). This allows you to position models on the printer’s “build plate”, a metal plate that moves up and down so that you don’t just end up with disconnected layers floating in the resin.

So I end up with a “raft” that ensures the die stays attached to the plate, and a lot of little legs or “supports” connecting to the die. I’ve found placing these along the edges of the die the best solution for allowing them to be removed easily after printing. 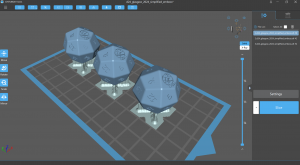 When it completes, I need to remove the dice from the build plate with a metal scraper. I then wash in an alcohol bath to remove any excess resin. Next I dunk in some hot water for a few seconds. Heating up softens the support legs so they can be removed easily. Next, I leave them under a UV light for a few minutes to harden or “cure” the resin. You don’t want to cure them too long as they can get discoloured and become brittle, just long enough to reach the correct hardness. 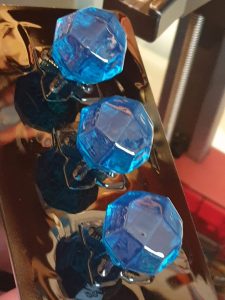 The points where the supports were attached can leave tiny raised bumps, so the next step is to use some fine sandpaper to remove those. I also try to smooth off the layers lines from the printing, though I haven’t managed to completely remove these. 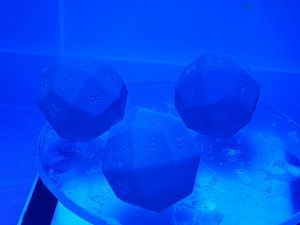 Finally, I fill in the numbers and the convention symbol. There are a number of ways this can be done, but the method I’ve found works best is to use “filler paint”, which is a bit like a very soft crayon, that fills in the indentation but wipes off the smooth sides easily. 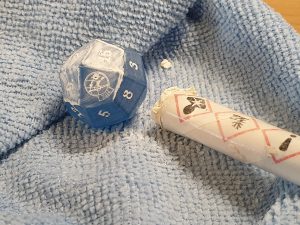 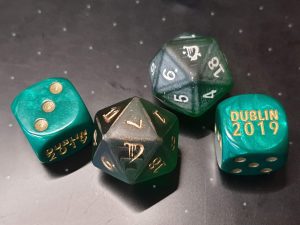 I put some of the dice in fan fund auctions, and was quite surprised at how popular they proved to be, with some leading to bidding wars that raised amounts of money that I find a little embarrassing.

When it came to Glasgow, I wanted to use the 24-sided solid, but the one problem I had with it was the sides were quite small, so it was quite difficult to get the Glasgow logo to be legible on it. I tried a number of methods to thicken the lines, and reduce details. I decided to simplify the text at the bottom from “GLASGOW 2024” to just “2024”. However, on top of those measures I ended up making the die about 25% bigger, which seemed to solve the problem. 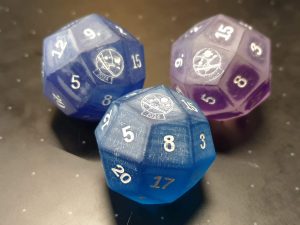 And how well do they work as dice? I’d have to say pretty well. I haven’t done a scientific study, but all the faces do come up with reasonably equalish frequency. I wouldn’t stand over them for anything you’re putting money on, but for casual gaming they are fine.

Now, we just need Esther to design a game that needs a D24!

This post is brought to you by James from the Glasgow 2024 promotions team.