Exploring the Hugo Awards: The 2020 Finalists for Best Graphic Novel

Graphic novels. Sequential Art. Comic books. Arguably one of the oldest communication formats in the world, modern comics have always had a powerful connection with science-fiction. Many graphic novels that are now regarded as corner-stones of the medium are some sort of science fiction story. For example, Alan Moore’s seminal work, Watchmen, has a Hugo. From tales of dystopian futures to super-hero stories, all sorts of comic-books have won Hugo awards in the past. This year’s selection is a broad mix of art styles and storytelling; let’s dive in and see what they’re all about.

Comic book writer Kieron Gillen is rather fond of his word-play, and DIE is a perfect title for this deconstruction of fantasy tropes, as it’s both a reference to the dice found in tabletop fantasy games and also a rather more obvious indicator of the dark tone of this book. DIE is the tale of a band of former friends who, twenty years ago, vanished only to re-appear years later, worn and tired, claiming to have no memory of what had happened. Now in their 40s, they find themselves yet again trapped in a fantasy world, gifted with incredible powers and desperate to return home. Described by the author a ‘goth Jumanji’, DIE is a clever deconstruction of the fantasy genre as well as an examination into how we tell stories.  Stephanie Hans art feels like a fantasy poster and delivers the goods on every page.

Dark, clever, and quite witty, DIE is a loving but critical look at fantasy and storytelling in general which also happens to have a thrilling and engaging plot. 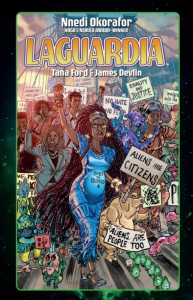 Nnedi Okorafor and Tana Ford’s graphic novel LaGuardia is an extremely timely tale of love, discrimination, and immigration. Set in a near-future where Nigeria has become an intergalactic hub for aliens across the galaxy, it’s the story of Future Nwafor Chukwuebuka, a passionate young woman who is out to save as many people as she can. Heavily pregnant, she travels to the US in order to help others start new lives, it’s a powerful tale with powerful metaphors. Tana Ford’s artwork is appropriately fun and strange. It’s a celebration of diversity and a story about why one must fight for everybody’s rights.

On the face of it, this three-time Hugo Award-winning comic book looks like many of the books bearing the Image comics label; visually striking characters, rich artwork and a generically beautiful main protagonist. Scratch below the surface and we get an incredibly detailed and enduring fantasy world with strong feminist and social justice themes. It’s the story of Maika Halfwolf, a young woman who swiftly discovers that her power and fate are tied to an ancient and god-like supernatural being.  As Maika’s destiny unfolds, we discover more about this world

Sana Takeda’s art is simply lovely throughout. World-building is present on pretty much every page. The story swings wildly been cute and terrifying, and Takeda gets it right every time, giving us both adorable heroes and terrifying monsters. Marjorie Liu’s storytelling is strong and witty.  In volume 4 we learn more about Kippa, Maika’s fox-like companion who has a destiny of her own. Will this volume break the Hugo-winning streak? Time will tell. 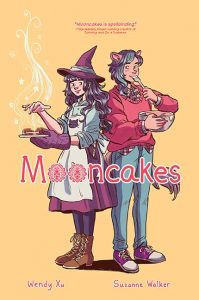 Suzanne Walker is best known to Worldcon attendees as a regular contributor to magazines such as Uncanny and ClarkesWorld, as well as her work on disability representation in genre. She teamed up with highly successful Brooklyn based artist Wendy Xu to create Mooncakes, an incredibly sweet story about love, magic and lycanthropy. It’s a gentle and fun magical adventure, with a diverse cast and a fair amount of plot twists.  Wendy Xu’s art is very nice indeed, putting the fantastic side by side with the modern world. 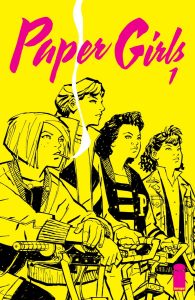 Volume Six of Paper Girls is the stunning conclusion of Brian K Vaughan’s critically acclaimed story about teenage rebellion, weirdness, and time-travelling. Given that it’s set in the ’80s and it’s about four push-bike riding teenage girls who uncover a paranormal conspiracy, it’s been compared favourably to the TV show Stranger Things.  The story is about as odd as Vaughan can get, and given that he wrote Saga, that’s pretty weird. What really makes this book memorable is Cliff Chiang’s 80’s pop-art style that keeps the reader fascinated throughout.

The Wicked + The Divine, Volume 9

Kieron Gillen’s second entry into this category is the conclusion of his long-running series about a band of young people who inherit the powers of a god. Set in a world much like our own, The Pantheon live fast and die young; the cost for incredible power is a short lifespan. Gillen’s genius here is to present the young gods in a way similar to pop stars, right down to the hordes of fans, concerts, and performances. A story that began with Lucifer snapping their fingers ends in a much more epic fashion as this pop-culture fuelled drama concludes. Filled with clever cultural commentary and a decidedly queer vibe, this is a compelling read. Jamie McKelvie’s art nails the style and substance of the piece throughout, making this a very cool and eye-popping read.

This article was brought to you by Ed Fortune, Promotions.

We are the Bid Team for Glasgow in 2024 – A Worldcon for Our Futures. We are part of the vibrant Worldcon community. We would love to administer the 2024 Hugo Awards for you, from Glasgow.
Please consider supporting us.