This week we have a delightful introduction to Bobbi Armbruster, the Queen of Time herself. 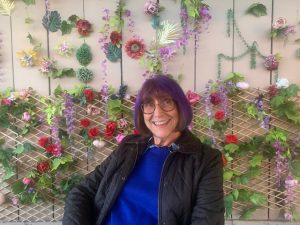 My official position, I believe, is Manager of the Timeline. Yes, I am the Queen of Time! Not that I can do anything with that; it doesn’t benefit me in any way, darn it. But I am also casually on Esther’s advisor staff. Just to clarify, no, I do not herd cats. What I try very, very hard to do is to gather important dates that are needed for planning and make sure they are communicated. That takes the form of fifteen minutes at the beginning of every meeting, saying ‘okay, everyone, how about this milestone?’, but these are all things that the committee have set for themselves, it is their timeline. They have defined it, and all I do is maintain it and present it. Beyond that, I have worked in almost every WorldCon division, except Tech (being well known as a Destroyer of Things Technological), and my specialty is Exhibits and Facilities.

I am based in Southern California, in beautiful Venice Beach. And I freely admit – this is paradise. Both my husband and I are retired, and we have been asked where we are planning to retire to. Where else would we want to be?! It’s a wonderful place to live: it’s bohemian, an artists’ colony, although it is gentrifying. We also get to be politically active, involved with homelessness and those sorts of issues. We’ve been in Venice Beach for forty years now.

My formative experiences were through books. I’m old enough that I grew up in the age of B science fiction movies. Or rather, B, C, and D science fiction movies, which I was totally addicted to. And I was always a little out there in what I enjoyed, ever since I was a kid. But I’m also slightly dyslexic and I have reading issues, so in elementary school I used to fake being ill and they’d send me to the nurse’s office. And the nurse’s office was the library. The cot that I got to lay on was right next to the science fiction and fantasy stuff. So, I improved my reading, and, as most pre-teen girls do, fell in love with horses. Walter Farley’s The Black Stallion books were my favourites. So, my very first science fiction book was The Island Stallion Races by Walter Farley: a lonely boy, horses, aliens, spaceships, a race in Cuba, it was just perfect.

And I’ve kept my love of horses through the years, though it has been slightly transferred to dragons. In the science fiction community, dragons are the horses for us all. Though I can’t afford one of my own, I’ve not missed a single Kentucky Derby on television. And I recommend the movie The Black Stallion as well. As far as games are concerned, I was an original Dungeons & Dragons player, with a dungeon based on the Nutcracker, with all sorts of traps and puzzles.

I am very fortunate in that I was able to turn my hobby, convention running, into my profession. I’ve often been described as a conference junkie – attend them, run them, doesn’t matter – I love conferences. Somebody back in the early 90s mentioned that people pay money for what I do. It was a revelation. I started my own event planning company, and I specialised in small conferences for non-profit organisations that used their events to fund their budgets. And I made my living for twenty years doing that. 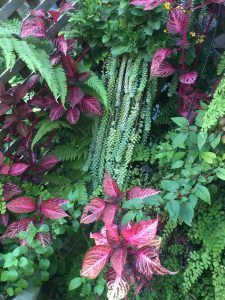 When con-running became my profession, gardening replaced it as a hobby. Now in my mid-70’s, gardening has become difficult and I’ve had to seek alternatives.  My chosen replacement to Gardener Extraordinaire is Obnoxious Film Critic.  Taken by the cinematic beauty of “Vera” –  11 seasons, different actors, different directors, different writers, different camera folks – but the same obvious love affair with Northumberland (of all places!).  This caught my attention and I began a stint as a film student, looking at individual shots & scenes in TV shows & movies of heart-wrenching beauty and astounding composition. I started looking at film as Art rather than “just” entertainment and have turned into quite the opinionated art critic. I’m also a sports fan – NFL football (I own 2 shares of the NFC North champ’s Green Bay Packers!) and tennis  and can be found glued to the TV during the 4 majors.

During the past two years, what kept me going were the connections (and honing my Zoom skills). Connections to people and to art, those things that really feed your soul. It was a matter of figuring out what I needed to keep me sane and arranging for it. For me that was family – my husband and I have two sons and six grandkids. And all the men in the family love to cook, so we have set up a family zoom chat. Every month, each group has to come up with a dish based on something we’ve discussed. Last month it was cauliflower. No fantasy-inspired dishes yet, but we are getting there.

For Glasgow in 2024, I am most excited for the people who are going to be there – my extended European family, everybody I’ve not seen for a while and will get to play and spend time with. And then there’s exploring Scotland. I saw a little bit of it after LonCon, went to the Fringe, and to see Loch Ness. I wouldn’t be a fan if I didn’t. But now I’m going to explore different parts of Scotland, and suggestions are very welcome.