It’s 2021. It’s been over half a century since the year we landed on the moon and threw the first brick at Stonewall and we still haven’t seen an openly queer superhero on the big screen. We have only recently seen science fiction and fantasy novels and stories begin to reflect the diversity of their readership. So one could be forgiven for thinking queer characters and queer stories in science fiction and fantasy are a recent development. That’s not, however, the case at all. Queerness has been a part of the DNA of these stories for thousands of years.

Nearly 2000 years ago, the Greek writer Lucian composed A True History, wherein a man is swept up to the moon by a rogue storm and discovers a society formed entirely of men. There is discussion of how the society reproduces—all the men producing male children—as well as evidence of same-sex marriage: the protagonist’s prowess in war wins him the hand of a prince!

It’s possible—arguably, even likely—that there were many more stories featuring queer protagonists, going back even further. However, most of them have been lost to time, and even among those that survive, many have been straight-washed, their queer content lost to bigotry and homophobia.

Stith Thompson was an American scholar and folklorist who was central to the creation of one of the most influential databases of fairy tale and folklore, the Aarne—Thompson—Uther Tale Tyle Index. It’s a tool still used by academics today but it was not created without bias. By Thompson’s own admission, he applied his own sense of right and wrong in the creation of the Index, listing motifs of ‘Homosexuality’ and ‘Lesbianism’ in a section labelled ‘Unnatural Perversions.’ Beyond that, he also deliberately omitted positive depictions of queer characters and relationships from the catalogue. 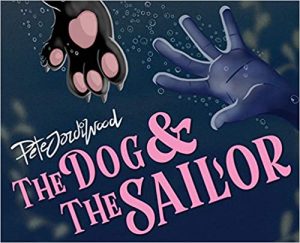 How many queer stories were lost because of this one man’s bigotry? We know examples existed, not only because Thompson specifically speaks of omitting and deleting them, but also because at least one has been recovered! Cornish writer and illustrator Pete Jordan Wood uncovered ‘The Dog and the Sailor’ as part of his research into folklore and fairy tales. Spoiler alert, in this tale the sailor is the one who ends up kissing Prince Charming.

Then there are the stories that have been changed at an editorial level to minimise, moralise, or occlude the presence of queer characters. Oscar Wilde’s The Picture of Dorian Gray, for example, had several bits ruthlessly edited out, not only to eliminate or reduce the presence of homosexual desire in the book, but also to remove instances of degenerate heterosexuality. Fortunately an uncensored edition was released in 2012, restoring full disaster bi energy to the seminal work.

Even if we restrict ourselves to the time period after Mary Shelley’s iconic work, Frankenstein, created science fiction as we recognise it today (a novel that itself has queer implications), there are explicit examples of queer people in the genre.

Though in some senses a morality tale, 1872 gave us lesbian vampires in Carmilla by Sheridan Le Fanu, and 1906 saw the publication of An Anglo-American Alliance by Gregory Casparian, which openly featured a lesbian romantic relationship.

Today, there is increasing representation for the queer community to be found in all manner of works of fantasy and science fiction. We have lesbian necromancers in space and genderfluid demigods, trans priestesses who build their own gods, and gay sorcerers who can rewrite reality itself! That said, there is still a long way to go. But howsoever long the road, queer people have been walking it since the beginning.

This article was brought to you by Trip Galey in association with Promotions.

Trip is a writer, a PhD student, and a researcher of all things pursuant to bargains, exchanges, and compacts of a faery nature. It is inadvisable to attempt to make a deal with him. He has been, in the past, a reluctant cowboy, an Ivy League collegian, and an itinerant marketing professional. Mostly harmless. You can find him on twitter @TripGaley and his short story “The Last Dawn of Targadrides” in the Glitter + Ashes anthology from Neon Hemlock Press.