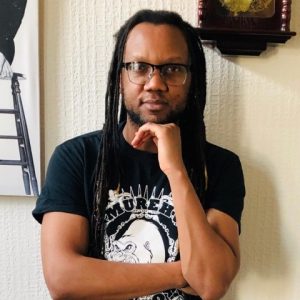 For our very first “Spotlight Scotland” post, which coincides with Black History Month in the UK, we are very excited to introduce you to Tendai Huchu. Originally from Zimbabwe, he is now based in Scotland, where he lives and writes. His latest book, The Library of the Dead, came out earlier this year in hardcover and this month in paperback from UK Tor. If this interview has whet your appetite, you can order the hardback HERE and the paperback HERE from Golden Hare Books in Edinburgh, Tendai’s favourite indie bookshop, or of course any good retailer. I personally (Fabienne from the blog team) have read the book twice already and can’t wait for book two. If you want to enhance your reading experience with the right soundtrack, press play on the music video below for a unique band that I feel encapsulates the atmosphere of the book perfectly (Zeal & Ardor, coincidentally a band from my home town in Switzerland). But without further ado, let’s dive into the conversation with Tendai!

First off, The Library of the Dead introduces us to the Edinburgh Nights series, combining your Zimbabwean heritage with a Scottish setting. Could you introduce us to the book(s) in your own words? 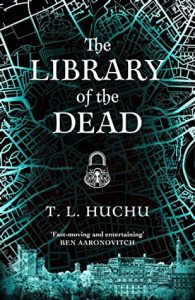 I can’t do better than the blurb which goes:
“Ropa dropped out of school to become a ghostalker – and she now speaks to Edinburgh’s dead, carrying messages to the living. A girl’s gotta earn a living, and it seems harmless enough. Until, that is, the dead whisper that someone’s bewitching children – leaving them husks, empty of joy and life. It’s on Ropa’s patch, so she feels honour bound to investigate. But what she learns will change her world. She’ll dice with death (not part of her life plan…) as she calls on Zimbabwean magic and Scottish pragmatism to hunt down clues. For Edinburgh hides a wealth of secrets. And in the process, she discovers an occult library and some unexpected allies. Yet as shadows lengthen, will the hunter become the hunted?”

Your earlier published work was very much not fantasy – why did you decide to pivot into genre fiction, and what do you think speculative fiction helps you express or perhaps reach readers with that literary fiction didn’t or did in a different way?

Genre is merely a set of narratological conventions which aid the storyteller. As far as I am concerned fantasy is the original mode of story. Think about all the myths and religions we have. The most compelling narratives, the ones that stay with us, contain elements of the fantastic. This is cliche, but literary fiction, which I have worked in, is itself a genre of conventions which signal something to the reader. Ultimately, you take the creative decision to find the best mode in which the story you want to write can be told.

What was your experience coming into fantasy fiction, which is still a very white-dominated space in many ways, both in terms of the people who populate it and the stories that tend to be told?

I have no problem reading fantasy by white people. Hell, some of my friends are white. The issue isn’t white people working in the genre — the issue is the systematic way in which the publishing industry has for years excluded authors and readers of colour. And so this “white-domination” you speak of is made to appear organic, even natural, (just ask the Sad Puppies) when it is actually the result of systemic discrimination. Every writer I know works very hard at their craft and faces rejection, irrespective of their ethnicity. I know a number of white authors whose work I think is dope but they still face enormous hurdles getting their work published. However, if you do this shit long enough, you come to realise this is not the meritocracy it’s made out to be. Some people aren’t rejected for artistic reasons, but because of their ethnic origins. Now if you are rejected for artistic reasons you can always come back with a better story, so that’s not a problem. In fact, it’s good for you; it gets you to dig deeper. If the reason is racial bias, well…

What led you to set your book in a near future dystopian Scotland?

What most people call dystopian is merely a depiction of Edinburgh as a third world city. It’s dystopian only in the same sense Lagos, Delhi and Sao Paulo are dystopian. Hopefully this shows the games I am playing with time and place because you have a modern Edinburgh blended with elements of its 18th century history. Those layers of the past are grafted onto the future, which seems weird as it goes against our neat, linear idea of progress until you notice that’s pretty much how the world works. The book opens with a reference to the historian Thomas Carlyle, and so I want the reader to infer that this is a history of the tail-end of Empire that they are reading about.

What are the central elements that you would like readers to take away from your work?

Every reader brings their own baggage with them when they encounter a text. What they get out of it is up to them. And so it should be.

Obviously the way Ropa and her grandmother perform magic is heavily influenced by your heritage. What other ways do you think the merging of cultures is most visible in your work?

There is no such thing as a pure or authentic culture in this age. This blending goes on all the time and is an essential feature of what it is to be human. The book doesn’t make a song and dance of all that, but you see this everywhere in the text in the architecture, music, and ideas the characters encounter.

Can you tell us anything about what is in store for Ropa in the future?

Book 2 in the series “Our Lady of Mysterious Ailments” is due out next spring. It promises more ghosts, grimoires, villainous villains, and magic most profane. [Editor’s note: the cover for book two has just been revealed, and you can read an extract at ScifiNow here]

In the spirit of Black History Month, is there work by other Black creatives that you would like to recommend to our readership, be it books, music, film or anything else?
Book: Scarlett Odyssey – C.T. Rwizi
Music: Sampa the Great

Game: Aurion: Legacy of the Kori-Odan

Tendai Huchu is the author of The Library of the Dead (Tor UK and US, 2021); the first part of Edinburgh Nights, an original and gripping fantasy series for a YA and crossover audience. Originally from Zimbabwe and a long-term resident of Edinburgh, Tendai is the author of two previous novels: The Hairdresser of Harare and The Maestro, The Magistrate and the Mathematician. These were published worldwide and translated into multiple languages. He has also (as T L Huchu) written award-winning short fiction, with stories appearing in the Manchester Review, Interzone, AfroSF, Ellery Queen and others. You can find him online as @TendaiHuchu on Twitter and his books in all good bookshops.