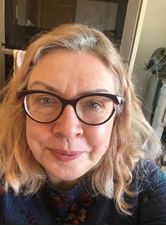 As a pre-teen girl, I adored Elinor Brent-Dyer’s Chalet School books. Growing up just outside Watford in South-East England and going to what was at the time a rough mixed comprehensive school involved in pitched battles with other local schools, stories set in the Austrian Tyrol, Wales and Switzerland written between the 1920s and 1950s could have been set in a fantasy land or another planet to me. It was a world inhabited by bold, strong and principled girls, where the richest and most important relationships between the girls themselves. When the girls do grow up and get married, their husbands are not central to the story. Often even men who are regularly featured in the series are barely characterised. The girls are at the centre. I have no idea whether Brent-Dyer was queer. She never married, but then nor did many women who grew up before and during WW1. But to pre-teenage me, the loving and affirming relationships between girls, and between the staff, was inspiring. 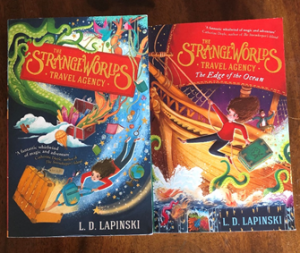 However, child readers need more than subtext, and that is what The Strangeworlds Travel Agency (2020) gives pre-teen fantasy readers. 12-year-old Flick and her family have moved from their council flat on the outskirts of a city to a new housing association house on the outskirts of a village during the summer holidays. Flick loves her family and recognises how hard her post-office clerk mother and refuse collector father work, how important it is that she helps with looking after her baby brother. She simply does not expect the call to adventure and does not agree to join it straight away. She is concerned that her magical status will estrange her from her family.

Magical or supernatural powers have long been a metaphor for queerness- see, for example, Marvel’s Uncanny X-Men, or Willow and Tara from Buffy. However, magical ability does not seem to be used as a metaphor for queerness: in Book 1 we learn that Jonathan Mercator, the Custodian of the Travel Agency is trans, and another character is referred to as “they”. Neither of these events are the point of the plot, and they do not result in hurtful consequences for the characters, as has so often been the case that TV Tropes calls this phenomenon “Out of the Closet, into the Fire”.

These are wonderful, exciting and funny books about travelling through time and space via suitcases stored within the travel agency. For experienced readers and watchers of fantasy there are delightful nods to Mary Poppins, Star Wars, Doctor Who and Terry Pratchett, and for those less experienced, there is a thrilling story in the company of Flick, who I suspect we will learn more about in the second novel, The Strangeworlds Travel Agency: The Edge of the Ocean. I hope that her relationship with the thief from the City of Five Lanterns, Nicc De Vyse, is explored more deeply, but all in all, I would like to see Flick developing more friendships.

This article was brought to you by Alison Baker in association with Promotions.

Alison Baker (she/her) is a lecturer in Early Childhood Studies and Primary Education at University of East London. She is completing a PhD on white working-class children and children’s fantasy fiction, and has published on social class in Harry Potter, children’s comics and graphic novels and cultural diversity in picture books. She lives in Brighton with her spouse, stepson, and cat, dragging everyone except the cat to cons. You can find her on Twitter @AlisonBaker01