Taking Pride in My Writing 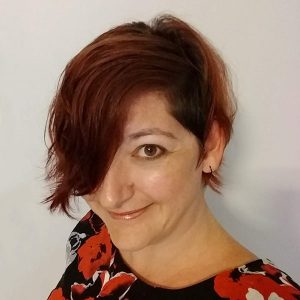 When I started writing, in about 2013, I used a pen name and wrote erotica. At the time, I lived in the same town in which I’d grown up, and where I played by the only rules I knew: a heterosexual cis-woman in a monogamous relationship. Through learning my craft, widening my reading, and meeting other authors in the genre at various events, I saw a world that invited me to question.

Writing erotica gave me permission to start exploring myself as a person, much more than other genres did, at the time. Now, there are so many great, diverse books coming out: Gideon the Ninth (Tamsyn Muir), Embers of War series (Gareth Powell), Space Unicorn Blues (TJ Berry), Silver in the Wood (Emily Tesh) – these are a few off the top of my head, in SF, that remain re-readable favourites.

I wrote through the lens of a first-person point-of-view where the protagonist’s (“my”) gender was unknown. It allowed me to ask, ‘what if?’, and as I continued with this, my own perspective grew. Not just that, but my characters became more three-dimensional and the landscapes I painted with words fleshed out too. I could be trans, non-binary, bisexual, pansexual, anyone and anywhere I wanted to be on the varying axes of sexuality, gender and identity.

This mostly remained on my hard drive and didn’t move from there. I submitted stories that felt more familiar and comfortable in terms of who I then was, whilst in the background, I still pondered those larger questions.

I also worried about being an imposter… Yes, some of these things are me, but without having experienced the same as others, how can I write authentically?

In 2019, I attended my first UK Eastercon. It opened my eyes to how I could ask those self-same questions in the SFF and horror genres yet write characters and worlds far more similar to those I’d grown up reading. Since then, I’ve had over 30 pieces of (mostly) speculative micro-fiction and short stories published. Whilst many of them are hetero-normative, others aren’t. Despite the short word count of drabbles (exactly 100 words) which make up the majority of my back catalogue, there’s still room to play with pronouns and in some flash fiction pieces, written from a first-person perspective, gender doesn’t affect the story, so, I ignored it. Why force a reader’s gaze?

I recently completed my first novella, a countryside-based, near-future, sort of cyberpunkish thriller. In it, there is a polyamorous triad. One beta reader asked why they couldn’t be friends instead, as it didn’t change the outcome and would appeal more to the (monogamous) mainstream. They were right, but then it wouldn’t be my story and my characters. And because it doesn’t change the story, it feels much more potent to stand up for wider representation.

My next novella, with its first draft now completed, is a space opera with a trans protagonist and their asexual partner. Of course, I could write these stories based on my 40+ years’ of being cis-het and monogamous, aligning characters and relationships with my lived experience but then, why should I, when I’m not that same person anymore?

I do feel I’m an imposter – I wasn’t aware of Section 28, I’ve not been bullied or come up against bigotry, I’ve not had to fight those fights just for my right to exist – but equally, I’ll always be an imposter to somebody, because two people can never have identical experiences, even with shared characteristics.

I fit in multiple places on the Pride rainbow, but to the people who’ve known me for years, I’m still that white, cis, heterosexual woman in their head, and that gives me a privilege that I can use in my writing. Representation matters: I can write diverse characters who don’t fit heteronormative values. I can use language to normalise ideas, which is a power in its own right.

The idiom I learned as a child, “sticks and stones can break my bones, but words can never hurt me” is wrong. Words matter, and they have power. They can harm and heal. So, in the places I feel I could get it wrong, I’ll use sensitivity readers to ensure I’m not defaulting back to a cis-gaze with my language or descriptions.

I may be a very small drop in a very large ocean in terms of my writing, and I may be new to some parts of the rainbow, but I’ll do my best to with the tools I have, and always write with kindness and good intent.

This article was brought to you by Emma K. Leadley in association with Promotions.

Emma K. Leadley (she/they) is a UK-based writer, creative geek, and devourer of words, images and ideas. She’s had over 30 pieces of speculative flash fiction and short stories published by independent presses, including Fox Spirit Books. She was a Grindstone Literary 2019 Microfiction Winner with her 144-word story, “Nothing to Lose” and Publishers Weekly described one of her stories as ‘standout’. She lives in Nottingham, with her husband and a pampered rescue greyhound. Visit Emma online at https://www.autoerraticism.com/publications  or on Twitter as Autoerraticism