I picked up numerous boardgames at the start of lockdown with the optimistic idea that I would have loads of time to play them all. Ironically the games I’ve been playing most, sometimes repeatedly, are those that can be finished in 20 to 40 minutes. The other, larger ones with novel-sized rulebooks keep staring at me from the shelf and now I’m too scared to ask them how they work. 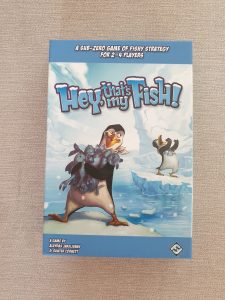 Hey, that’s my fish! falls perfectly into this category. It is a short and fun strategy game that can be enjoyed by all ages and doesn’t require too much brain power. It can vary from a simple ice hopping game to a vicious battle to eliminate enemy penguins depending on how competitive your fellow players are. And in my experience, they’re always out for the kill. 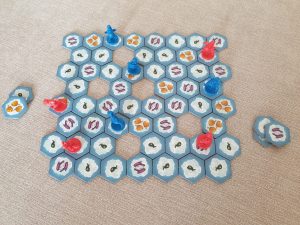 ice floes as possible. You race across hexagonal ice pieces, which disappear as soon as you leap off them, leaving an ever-dwindling game board. There are two parts to the game: collecting fish and trapping other player’s penguins on isolated ice floes, removing them from the game. I personally prefer concentrating on trapping your opponent’s penguins and then enjoying the spoils afterwards. The look of betrayal when they work out your plan is priceless. 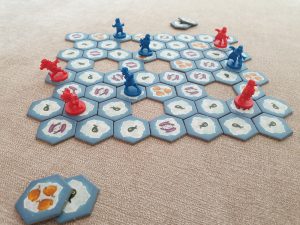 I find this a wonderfully relaxing game which I often play with my partner as a best of three. The mechanics are simple to learn and the game only takes a couple of minutes to set up. The most difficult part for us was picking up the ice floes in the middle of the board without the whole lot going flying. It says it’s for two to four players and surprisingly it isn’t terrible with two players, you’ll have more penguins to keep track of, but the game board would be empty otherwise. I’ve played it with more players, too, and it’s still great then! Having fewer penguins to control makes it harder to be cruel and pick other players off. You might even have to cooperate with one player to destroy a third player in a tense truce kind of thing.

In short, this game is good. I recommend you play it.

This article was brought to you by Alex Wren, Social Media Area Head in Promotions Glasgow in 2024. Alex lives in the Glasgow area and is currently doing a PhD in Biomedical Engineering. When she isn’t being our fabulous overlady of social media, she enjoys cosplay, running and playing Dungeons & Dragons, video games and loves board games. This Rookie’s Guide to Games Series is her excuse to try new games and expand her collection. You can find more posts from the series HERE.