Scottish Castles in Sci-Fi and Fantasy: Duart and Dunnottar

The November edition of our Scottish Castles series beckons, and this second entry in the series focuses on two castles with long associations with vampires and monsters. Though maybe not the most frequently portrayed or well-known examples in sci-fi and fantasy, both Duart and Dunnottar Castles have left their mark in fiction as well as history.

Scoobies familiar only with the television series may be interested to find Buffy and Xander in Scotland. In Buffy the Vampire Slayer Season Eight, published by Dark Horse Comics from 2007-2011 and set about a year after the TV finale, Buffy is based at Duart Castle on the Isle of Mull. 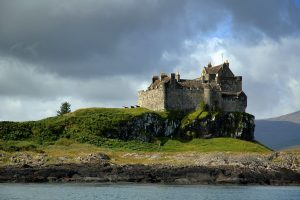 The 13th century seat of Clan MacLean was heavily restored in the twentieth century – and played host to a few films as well, including the action flick When Eight Bells Toll (1971) starring Anthony Hopkins and caper film Entrapment (1999) starring Sean Connery and Catherine Zeta Jones. Connery can even claim MacLean ancestry – on his mother’s side.

Dramatically situated on the rocky headland of the northeast coast of Scotland, Dunnottar arguably has a more legendary real-life history than its role in the fantasy film genre. Used as the iconic Frankenstein Castle in Victor Frankenstein (2015), Paul McGuigan’s re-imagined version of the classic Mary Shelley horror story starring James McAvoy as Dr. Frankenstein and Daniel Radcliffe as a much less grotesque Igor.

Meanwhile, historic Dunnottar has been intertwined with Scottish history since a chapel was founded on the site by St Ninian in the 5th century. The castle was taken from the English by William Wallace in 1297, where, according to the poet Blind Harry, he imprisoned in the church and burned alive 4,000 English soldiers – though, considering Blind Harry wrote his poem 172 years after Wallace’s death and cites sources that may never have existed, it is fair to say he may have embellished a bit. Dunnottar also housed the hidden Honours of Scotland (the Scottish crown jewels) from Cromwell’s invading army in the 17th century and played a significant role in the Jacobite rebellions of the early 18th century.

As a slight aside to Frankenstein (the modern Prometheus) – Prometheus, Ridley Scott’s 2012 prequel to Alien, heavily features the landscape of the Isle of Skye, including the Old Man of Storr.

So, the next time you find yourself on the Isle of Mull or on a cliff overlooking Dunnottar, keep your eyes open for ghosts, vampires, vampire hunters, and of course, Frankenstein’s monster. Who knows, some of the spirits just might be related to Sean Connery.

This article is brought to you by Frank ‘Jay’ Hall is a Galway Doctoral Research Scholar at the National University of Ireland, Galway. Frank’s project focuses on the stronghouses and fortified houses of Ireland, investigating their architecture and landscape settings. It seeks to determine the role of the early modern Irish stronghouse in a landscape, historical, and political context and to clearly define the architectural form that was prevalent throughout late medieval and early modern Ireland.