January’s entry into our running series on Scottish castles in sci-fi and fantasy will focus on two castles dramatically sited amid bodies of water. Eilean Donan Castle may be one of the most famous Scottish castles, known for its dramatic island siting and picturesque modern stone bridge. Meanwhile, Castle Stalker, sited on a tidal inlet, may just seem a bit familiar to fans of both fantasy and comedy.

Possibly the most picturesque castle in Scotland, Eilean Donan was the real-life stronghold of Clan Mackenzie during the Jacobite rebellions of the 18th century. The castle was likely founded in the early 13th century, and supposedly played host to Robert the Bruce during the winter of 1306 to 1307. The current castle was heavily restored in the 20th century by Lt. Col. John MacRae-Gilstrap, and it is during this time that the famous arched bridge was built out to the tidal island.

While the castle served as the Scottish headquarters of MI6 in 1999’s The World Is Not Enough, it played a significant role in sci-fi history that few may know. Eilean Donan was the filming location for 1980’s Black Angel, a short film that was produced to accompany screenings of The Empire Strikes Back in cinemas (you can watch the entire 27 minute short on YouTube). Written and directed by Star Wars, Alien, and Life of Brian art director Roger Christian, the fantasy short includes a step-printed fight scene that pioneered the technique then used for the famous cave sequence in The Empire Strikes Back. 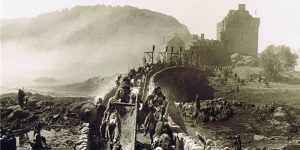 Eilean Donan’s most recognisable performance in the fantasy genre may be 1986’s Highlander. The castle was heavily featured as the home of Clan MacLeod, and the fantasy film has gone on to become a cult classic, living on through the tagline, “there can be only one.”

While there may be only one, there certainly isn’t only one castle shown in the Highlander series, and while featured briefly in 2000’s Highlander: Endgame, Castle Stalker is perhaps best known for its cameo appearance in Monty Python and the Holy Grail (1975) as the Castle of Aaaaarrrrrrggghhh. Graham Chapman’s King Arthur endures being taunted for a second time by John Cleese’s aptly named French Taunter before launching a full-on assault on the castle – an attack that is rudely interrupted by the local constabulary arresting many of Camelot’s finest, and thus ending the film.

Castle Stalker historically has ties to several Scottish families, and while Clan MacDougall previously constructed a small fortification on the site around 1320, Clan Stewart of Appin likely built the now present castle on a tidal islet of Loch Laich around 1446. The name comes from the Gaelic Stalcaire, meaning ‘hunter’ or ‘falconer’. Today, the castle is one of the best-preserved medieval tower houses to survive in western Scotland, and its picturesque location has made it a prime filming location. 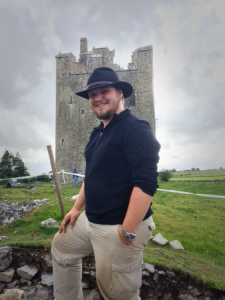 This article was brought to you by Frank ‘Jay’ Hall, a Doctoral Research Scholar at the National University of Ireland, Galway. Jay’s project focuses on the stronghouses and fortified houses of Ireland, investigating their architecture and landscape settings. It seeks to determine the role of the early modern Irish stronghouse in a landscape, historical, and political context and to clearly define the architectural form that was prevalent throughout late medieval and early modern Ireland.